We're glad you’ve found us, because we've a little treat for you… 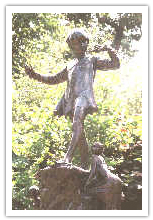 It may seem that the words "kids" and "holiday" are mutually exclusive but it need not necessarily be so; in London there are a myriad of ways of keeping them happy, distracted and even sometimes encouraging them to learn something new. What child could fail to be fascinated by the Egyptian mummies or Bleaden Man in the British Museum, or put up with going round Keats' house in Hampstead with the promise of flying a kite on Parliament Hill afterwards? Or turn their nose up at the real live sharks at the Aquarium or the giant blue whale skeleton in the Natural History Museum (not to mention the dinosaurs....)? If your child has an scientific bent then the new Wellcome wing of the Science Museum is a must. It's also useful for answering those awkward questions kids sometimes ask as it's really up to the minute (they can have an exhibit up and running in 24 hours on a hot new topic) on what's going on both in science and in the news.

There was a Family Zone' at Victoria Station - offering nursery services for up to 10 hours (ages 6 months up) at £4 an hour. it was a good idea and got fantastic feedback but it has closed, victim of privatisation, despite still being listed on the TFL website.

Most of the glut of museums and attractions mentioned elsewhere on this site will appeal to children and adults alike; some however have gone further than the usual exhibitions and have extra activities usually during the summer holidays. Check times and availability beforehand. There is free admission for children at the Imperial War Museum, HMS Belfast, National Maritime Museum, Natural History Museum, Science Museum, Theatre Museum, Museum of London and Wellington Museum - and many more are following suit in 2001. One astounding thing is the skill the Galleries' guides have - they can enrapture a group of children in a painting for hours, we've often witnessed well-behaved groups sat around a picture, spellbound, that otherwise would be running round, bored and noisy.

The Victoria and Albert Museum

Exhibition Road, South Kensington Not only does the Science Museum have 7 floors of hands-on displays covering every scientific area, events, workshops and tours it also runs Children's Science Nights (ages 8-11) where the museum is shut to the public but open to a group with various activities going on (sleeping probably NOT being one of them - be prepared for a cranky 10 year old the day after!) Sleeping bags needed - but can be bought very cheaply in town. See our museums page or their website

Cathedral St, London SE1 0207 4030123 A reconstruction of Sir Francis Drake's ship with crew in full costume - this is somewhere you can actually leave the kids - for an entire four hours - safe in the knowledge that not only are they having fun they're also learning all about the Tudor era (might be handy when you go to Hampton Court) The workshops include such intriguing delights as loading cannons, weighing anchor and sailing the high seas (in theory only you'll be relieved to hear). If this all sounds too good to leave to the kids they also do overnight (4pm till 10 am ) adventures for the entire family (from 2 years old upwards) where you can dress up in the outfits, learn the songs and eat the food of Drakes' sailors. All for £30 per person per night - cheaper than a good old English Bed and Breakfast and the food is probably from the same era. Website This features on our Walk One City Farm There are two - one in Shoreditch east of the station of the same name, and another in Hackney, (well it's actually in Tower Hamlets, but what's in a name) Hackney City Farm has a good restaurant which won the 'Best Family Restaurant' section in the awards in 2005. Nearby Spitalfields market has a lot to interest kids (open at weekends, best on a Sunday). This is a good area for 'the whole family' a phrase which usually strikes fear in our breast but here is quite accurate.

For hardcore enthusiasts a SUNDAY circuit of: Liverpool St station - train to London Fields, walk back south to Broadway Market (good french delicatessan/cafe, good brunchy pubs and restaurants). Then continue south through Hackney City Farm (restaurant there won best family restaurant of the year 2005..) to Colombia road, along Colombia road then South to Brick Lane, Hugenot district, Spitalfields market and back to Liverpool Street station - see an AtoZ map or go HERE for mapping it out - you may need to expand the map both south and north to get the whole route.

Trafalgar Square, has quiz sheets available at the information desk for all ages. Website See also our Art page

Somerset House, The Strand. First Saturday of the month 11 am (free plus one adult) Kids Drop-In with making, drawing, workshop based activities encouraging children to be interested in art. Website See also our Art page

255 Finchley Road, NW3 (Tel: 0207 435 0903) Probably only for those children who particularly enjoy art there are regular exhibitions and workshops.

Hamleys, billed as "The biggest toyshop in the world". Regents Street. Only for those with large wallets or b wills, Hamleys is the Harrods of toyshops; with every imaginable toy, hands on displays and demonstrations on ?? floors it will keep children of every age occupied for longer than you can bear; a possible trade-in for dragging them round Selfridges earlier on in the day. Website

Windsor Tell the children you're going to see things done with Lego they won't believe (its one of Britain's favourite children's attractions - and fairly popular with their parents by all accounts) On the way sneak in a quick look around Windsor Castle and Great Park.

Brentford, Middlesex. along with Snakes and Ladders, a fantastic indoor (for those unavoidable rainy days) and outdoor adventure playground where the kids can let off steam while the grown-ups wander around yet another royal palace - this time the home and gardens of the Duke of Northumberland Website

A two hour train trip out of London, this is one of the top attractions in the country ( not just for kids)- a kind of Stately Disneyworld, with enough to stop an adult dying of boredom (it started off as a Stately Home, owned by an impecunious gent who didn't want to sell out to the National Trust or one of the other charities designed to keep grand old houses afloat after their aristocratic owners sunk). Costly and sometimes brash, a visit here will probably buy off your children for the rest of your holiday. You can get a combined train/admission ticket to save on the huge admission fee. It's also popular with parties of adults who go for the thrill-rides.

Another Alternative, just outside London is Chessington - still expensive and less grand but more practical than Alton Towers.

A trip to Disney World Paris isn't out of the question now that Paris is only 3 hours away by train - again there's a combined entry/train ticket which should save you money. The workers are less sickenly ingratiating than their Floridan counterparts and it's fun watching Parisians trying to be polite (it's not in their genes). You might want to look here for advice before considering this option.

The English are renowned for not having the most child friendly restaurants in Europe - probably dating back to the days when children ate separate meals prepared by nanny and only met up with their parents washed, scrubbed and ready for bed. However it may not be necessary to resort to the ubiquitous fast food joints for every meal - most London restaurants claim to be child friendly and offer kids portions; be aware that that doesn't necessarily mean they will welcome you with open arms however - especially if you change Junior's nappy on the dining table....Again we refer you to Harden's Guides and suggest you check when booking; those in the following list say they actively encourage children (but don't necessarily provide the best food...

105 Strand and 1 Dover St On weekend lunchtimes - among the best places to bring children.

Segaworld in the Trocadero - a monstrous whirl of noise and colour that should keep kids of all ages busy, though can prove vertiginous for adults, and costly.

Coram's Fields is an area given over to children (adults not allowed to enter without a child) in the heart of Bloomsbury (Tube: Russell Square) with animals, play areas etc. There's a Child Psychology Institute which faces the Area if they get too boisterous...The new 'Diana Memorial' children's playground is in Kensington Gardens, close to the famous statue of Peter Pan, inspired by the books of Barry - it really is excellent and very popular with children - for ages 2-12 (Tube: Notting Hill Gate on the Central and Circle lines.)

Apart from the famous London Zoo which is great for kids there are a couple of other low-key attractions: Battersea Park Zoo - Small zoo with domestic and non-domestic animals including monkeys, otters, pot-bellied pigs, birds and reptile house. Animal contact area - also does pony rides.

Spitalfields farm - Weaver St E1/Vauxhall City Farm - 24 St Oswald's Place/Hackney City Farm - 1a Goldsmith's Row Hackney E2 (this latter can be combined with a visit to Colombia Road Flower Market on a Sunday, as it's very close by)

Polka Children's theatre would be one of our top choices, should our nieces and nephews descend on us for the day.